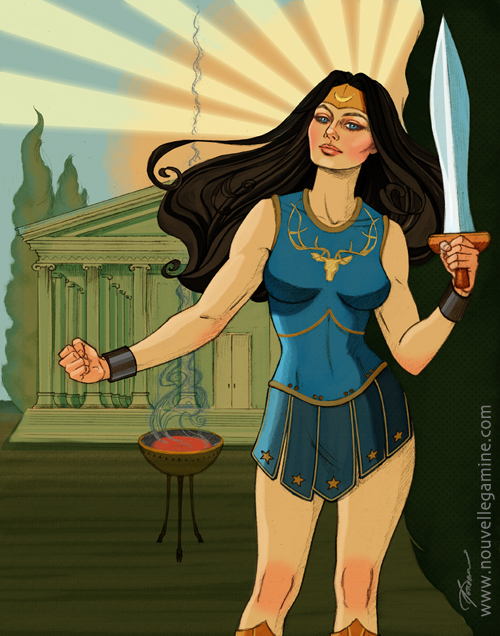 I got an early Mother’s Day gift from my husband, a book called,”Wonder Woman- Amazon-Hero-Icon- ” Which was fun because I’d just finished an illustration of Princess Diana on Paradise Island before she becomes Wonder Woman- sort of a “what if?” Anyone following my Instagram knows how long I’ve struggled with this picture. It took forever to come together, but I’m finally happy with it.
A few years ago I was drawing superheroes with my son Karl. When I drew Wonder Woman I drew her costume a little differently each time (she’s had so many). One was a variation of this one & I really liked it. I love “Gladiator” and wanted to incorporate a Greek/Roman look, without falling prey to over designing it. While I’m also not a big fan of everything in comics having to be realistic or somehow “make sense,” I’m not opposed to a created world having its own logic.

Wonder Woman’s costume is constantly redesigned. For some reason people can’t deal with her swimsuit. Personally I love it. But the redesigns are usually a mess- not even a hot mess because there’s nothing hot about them- they’re just a mess. So, I set about figuring out why WW wears what she wears. I hit upon the idea that the Amazon’s think America worships Zeus bc of the American eagle on Steve Trever’s uniform. I expanded that to the Amazon armor having the animal totem of each Amazon’s patron goddess. In Diana’s case, a stag for the goddess Artemis. When she wins the contest to become Wonder Woman and travel to Man’s World the Amazons make her American armor with Zeus’s eagle.

Oh, and my dream Wonder Woman went to 1940s America with Steve and then went back to Paradise Island, only to eventually return to the US in the present day. Something she can do bc the Amazons are immortal- DUH DC Comics. Sheesh! Each reboot makes everything so ridiculously convoluted. She’s a magical princess! It’s so easy!

Anyway, here’s the lovely Princess Diana as she goes to investigate the mysterious crash off the coast of Paradise Island. (Yes, I know it’s Themyscira, but Steve can’t pronounce that so he just calls it “Paradise Island”. Poor Steve. He’s such a hot, good natured himbo.)